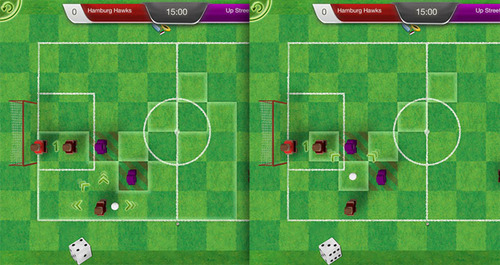 StreetSoccer V1.1.0 is now heading for Apple review. This again brings a bunch of bugfixes as well as two new features:

The whole app has now been localized to German, which also forced me to finally remove all the Photoshop-pre-rendered labels and buttons and replace them with my own gradient UILabel. This should make everything a bit crisper on retina devices and reduce the app file size. Since the font I’ve used before is not available on iOS, i had to change the look a bit but I actually quite like it.

The other new feature is movment area visualization. A slightly glowing border is now drawn around all fields that can be moved to. Deriving the algorithm that creates the required mesh was actually quite challenging, but I think it helps a lot. Since one no longer has to count to what maximum field on can move, the game play got even faster and it should be a bit easier to understand for new players.

There have also been some vertical text label misalignment issues on iOS 7 which I hadn’t noticed before. Originally V1.1.0 should have include DICE+ support but I opted to push that back to V1.2.0 and get the movement area visualization out sooner as I like it quite a lot.