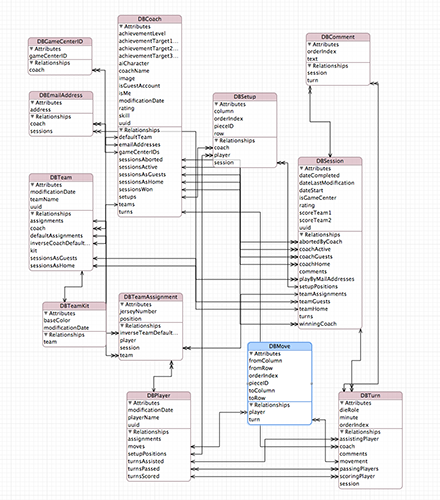 Up to now, all the app did was store each session in its own file and basically just dumping the runtime data to the device. This worked fine, but after talking to a couple of beta testers and playing the new Lost Cities for iOS, I realized that Streetsoccer definetely needed some form of statistics. Although building and testing the database system was quite a lot of work, it actually paid of and solved a number of other problems I had postponed. For example, the Formation menu already did let users customize the name and numbers of their players, but that information was not used in the in-game graphics simply because there was no data structure to put them in yet. Same for the team name and storing a customized team kit. While the in-game graphics still doesn’t use that data, it’s mostly a question of designing where/how to show them than actually implementing it (except for the team kits which probably will take a lot of work).

The actual schema got a bit more complex than I initially thought it would but it opens up a lot of possibilities. For example, the soccer players are not fixed to one team but are instead assigned on a per match base. This way a team can potentially at some point later in development change its line up of players for each match and a player can be used for multiple teams. A separate guest account has been integrated so that you don’t mess up your team statistics when handing your device to others. A human player can have multiple teams and so on and so forth. Of course that’s not implemented in the UI right now, but the database is already able to handle it.

The most apparent bonus by having a database is of course the possibility to do proper statistics. One beta user (hey Antii) did an astonishing analysis of his matches against the AI using an Excel sheet and now I’m trying to re-create something similar in the app. Most important are of course die role distribution, but fields run per player piece, ratio of spending points on running or shooting the ball, most occupied positions and much more should be interesting. I’m still trying out mockup designs, trying to figure out how to show the raw numbers. Here are some early ideas:

In other news, I’ve got a couple of beta users testing the app and the feedback so far has been quite good. Of course there are still a lot of things to do, but the most apparent problem seems to be the still-prototype nature of the in-game graphics. Unfortunately, all potential 2D/3D artists I were in contact with at one point or the other have dropped out so I’ll guess I’ll be doing the final ones myself. The main question is still whether to keep the top down 3D look with a user adjustable camera or just redo everything in hand-painted 2D…

That’s it for now. There have been other developments with the app but I’ll save those for the next post…