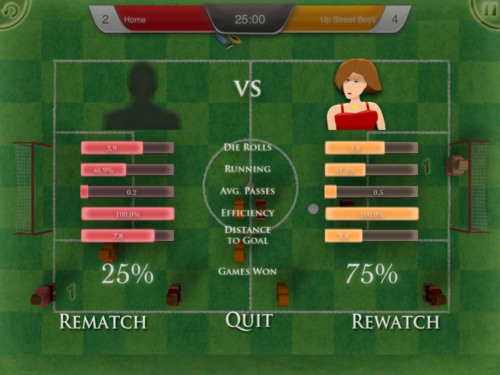 After 2 ½ years, coding on Streetsoccer is finally complete. Well, truth be told, I still have to add something to handle potential support cases tomorrow but basically the game itself is done! I’ve just re-checked the repository: The very first commit for Streetsoccer was done on Dec 25, 2010. Before then I had worked on Monkey Dash and used a lot of that code as a basis for Streetsoccer. So all in all let’s call it three years of spare time coding, testing, trying to find artists to help … all interrupted by a few things like day jobs, relationships and other things that were simply more important… : )

The game has gained a tremendous level of polish in the last couple of weeks.

I’m not sure how much work on the in-game 3D assets will be done before submitting the app. Probably a lot has to happen with the first update just to finally get the app out!

The plan is to send new test builds to beta testers later today, paint the missing AI character images and then call it quits … for now! I’ve already got like 70 tickets full of ideas and improvements for future updates.