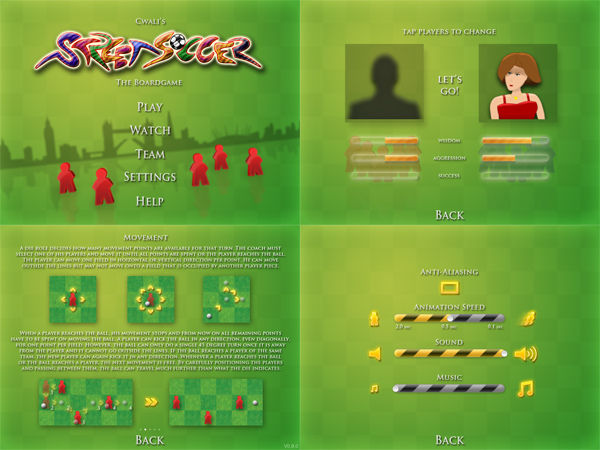 Happy new year everyone! Life is what’s happening while you’re making plans, and so it has been quite a while since the last post. A lot has been going on, both on and off topic. I don’t do new years resolutions but otherwise I “post more regularly” would definetely be one of them…

To make good, here is a quick run-down of what’s been happening in the meantime: Recipes is going same as always. There is still an unfinished iPad version lying around somewhere on my hard disk but I haven’t made progress on it in a while. A couple of mails from happy users, a few bug reports, not much development on the code side. I hope to do an update soon to fix some issues for various people, but by and large all my efforts currently go into getting a first public version of Streetsoccer done.

Speaking of which, Streetsoccer is going great. I finally nailed the design for the menu graphics which was a big problem. I had contacted various people to help me with the graphics work but in the end I had to do them myself. I’ll probably do another post and video for that soon since it’s not the same when you don’t see the animations. I used a technique similar to what I did with Monkey Dash and have all the elements fly in and out, creating a sort of parallax effect. Feedback so far has been awesome.

I also managed to solve quite a few problems in the code. First there were frequent crashed due to the amount of memory the app required during loading of all the 3D assets. That again is worth another post of its own. In the end it amounted to using hardware texture compression and avoiding usage of the garbage collection. When I started, the maximum memory usage was about 60MB. After a day of tweaking and reading up on various topics, the peak is now at 5MB with no visual difference.

Another interesting issue comes from the way the internal architecture is designed. The 3D view and user interface are completely decoupled from the actual game logic which created all sorts of multi-threading problems. It was only a couple of days ago that I finally resolved what I hope was the last of a ton of related issues. What makes the whole thing so difficult is that the game controller actually fires a series of events and has to wait for all players and the 3D view to acknowledge that they are done processing/playing animations for one event before playing another. On the other hand, the user interface has to use the game controller to do various checks (can piece X move to Y and so on) which produces an intricat interlocking event system. Long story short, it now works! Also another post-to-be.

The main topics for Streetsoccer are now doing the final meshes/textures for the in-game view, implementing the career mode and if possible a tournament server system. All in all, it’s still lots of work but I’m seeing the end.

Totemo has been on hold as well while I was working on Streetsoccer, but since it’s using 90% of the same code it also progressed in one form or the other. There should be more development on this soon as Vicki Paull will jump on board to do the graphics. I’m really excited about this after seeing her other work. Still no word from Rob Fisher concerning Monkey Dash so I’m not sure if this is DOA or MIA. I’m not giving up on this just yet.

Well, what’s left? I bought a 5th-gen iPod Touch which I love, wish the iPhone would have that form factor. Funny thing is that it’s now my third iPod Touch (1st gen, 2nd gen, 5th gen) in addition to an iPad 1. Doing the iPhone SDK has probably been the best “marketing plot” Apple ever came up with as it “encourages” developers to constantly by new devices for testing *g*. My Cintiq has been idle for a bit due to a lot of personal stuff happening at the end of 2011 but I’m looking very much forward to spending some more quality time with it. If I wouldn’t be writing this post, I would probably be sitting at it right now… 🙂

All in all, the last two months should be worth at least 5 follow up posts. I learned a lot to say the least. Now, let’s see what 2012 will bring. For me, I’m very excited about what’s up on the horizon…